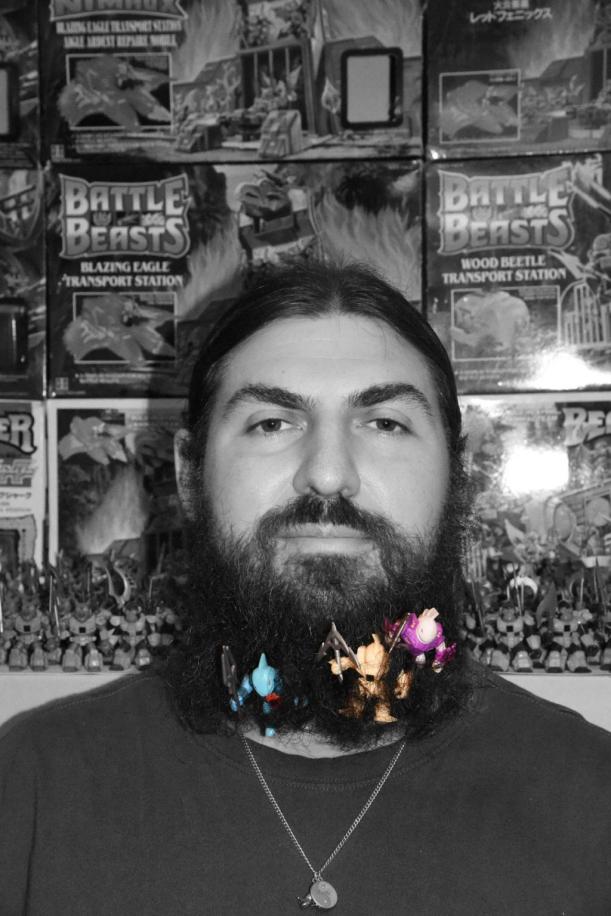 Hi my name is George; I’m from Long Island, New York. I’m 34 years old, a Union Carpenter and a Photographer.

I enjoy long walks on the beach with my Killer Carp. I go by the name Shadow Bat, which was chosen because of my first Greek Battle Beast (a black bat with fox arms) not long before I joined the online Battle Beast community.

Ok, so… Battle Beasts, when did you first discover them?

I received a two pack in a goody bag at my friend’s birthday party. I was immediately hooked. 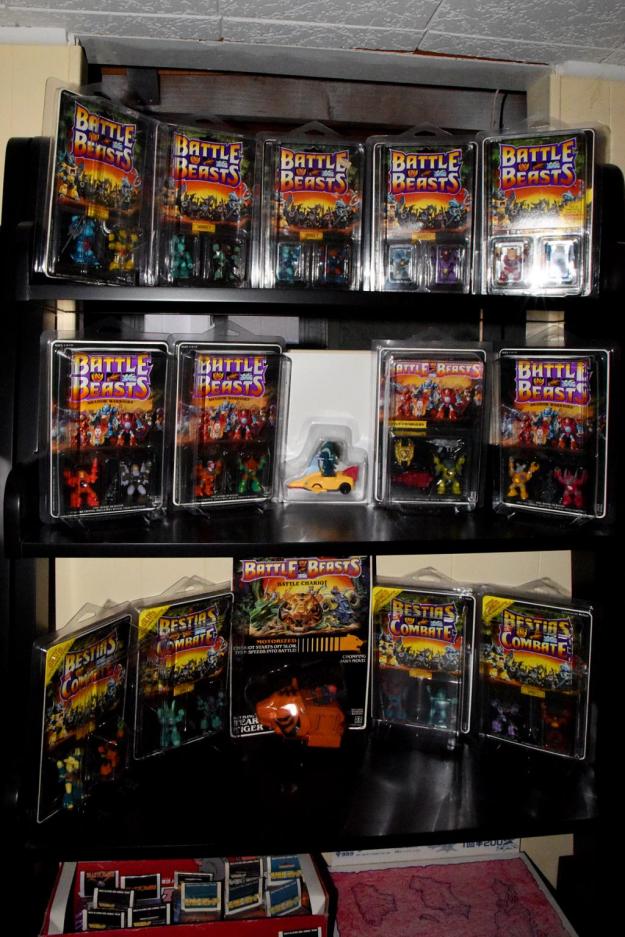 Do you remember much about different stores that stocked them in your area?

Mostly I got them from Toys R Us. They were in the front of the action figure aisle. I remember one day seeing the series ones in a clearance bin and being buy one get one free. I tried unsuccessfully to negotiate my way into 8 beasts, but at least I did manage to get 4.

How complete was your childhood collection?

I did pretty well. When they were released I got probably close to half of the 76 although I didn’t know that at the time. I had 3 chariots but no bases. I had all of series 1 and was probably 10 short of a full set by 1995 through trading for other toys or buying collections when friends were getting rid of them and also an unexpected late find.  Around 1991 when I hadn’t been able to find them for a few years, a friend told me that the drug store around the corner from him still had some 8 packs and I got the last two boxes

Did you ever take your beasts outside or away with you?

Of course, all the time. I used to try and take a duffle bag of toys anywhere I went if I could. When I couldn’t though, I always made the Battle Beasts my first choice. They came to school with me and went on vacation. Snow, beach, woods, every outing was just a new environment to battle in. 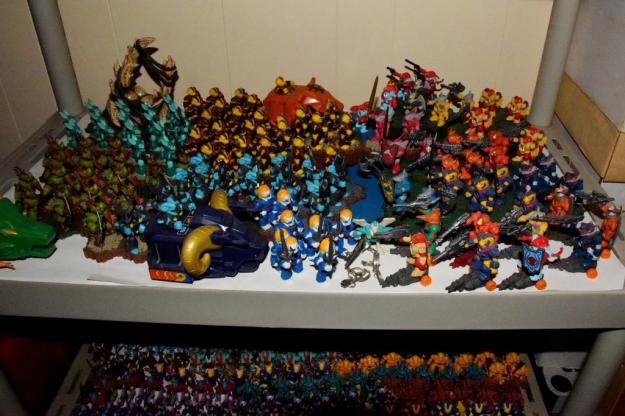 What are some of your fondest Beast memories?

I have quite a few.

I remember Christmas morning getting the three chariots and a whole bunch of series 3 beasts. To this day it was still my favorite Christmas. 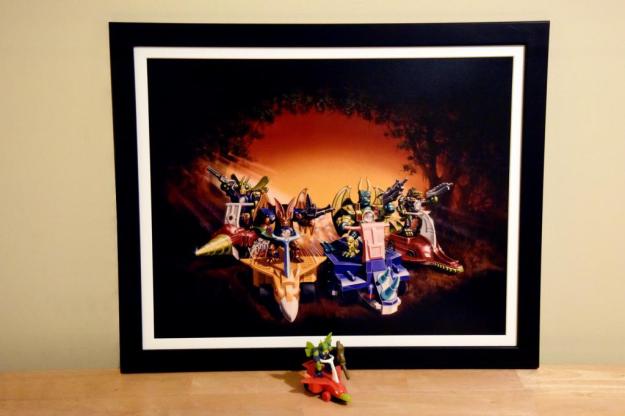 My friend and I used to trade toys all the time and I once traded him a Definitely Dinosaur for it’s length in Battle Beasts 2 feet worth. We argued over whether to measure by putting the beasts side to side or head to foot.

I didn’t have any bases growing up, but I used the Sectaurs Hive and G I Joe Terror Drome as opposing enemy bases.  I used to divide up my Battle Beasts, Army Ants, Muscle Men and GI Joes into two equal armies and wage massive wars across my entire room. I divided my Battle Beasts by Eye color; Red, Green, Purple or Black were evil and Blue, Yellow, Pink, White or Orange were good. 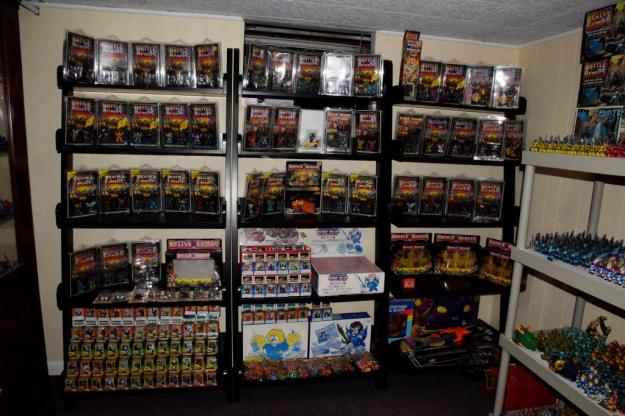 Now real talk; When and why did you start recollecting BB?

Around 2004 I started looking on the internet to find out more about my favorite childhood toys. I wanted to learn how many there were and see which ones I was missing. I was blown away when I learned about the Laser Beasts and premium figures. Eventually I started going on eBay trying to find them and also found out there was an entire community of collectors.  It was a great feeling to realize I wasn’t alone in my love of Battle Beasts 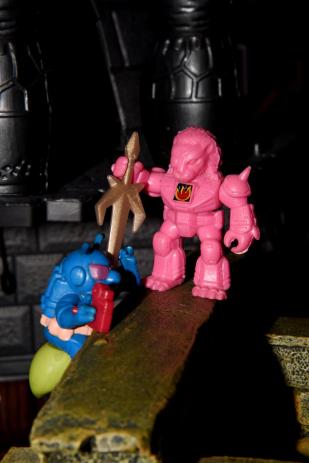 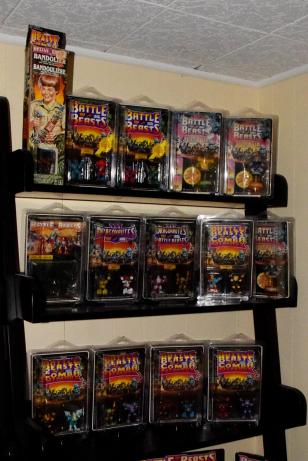 Do you still have any original BB from your childhood?

I have almost all of them. My mom gave a few away when I was a kid, thinking I wouldn’t notice. I still haven’t given up hope that someone will recognize their photo on the side of a milk carton and help them find their way home.

I decided when I started collecting again that this would be the only toy I dedicatedly collected. I said “after all, it’s such a small toy line, how much space could it end up taking?”

It developed a life, all it’s own. Just like a pet fish… the bigger the tank the quicker it grows. Now it looks like I need a bigger house. Sometimes at night, I’d swear I hear it whispering “Feed me!”

How did you decide how you wanted to display your collection?

It wasn’t so much a decision as a lack of options. Space has always been the biggest factor. I started out with two cabinets with a couple glass shelves, but it became way too cramped. I found 2 nice book cases and that opened everything up for a while but now I have 5 of those and it’s still not enough. 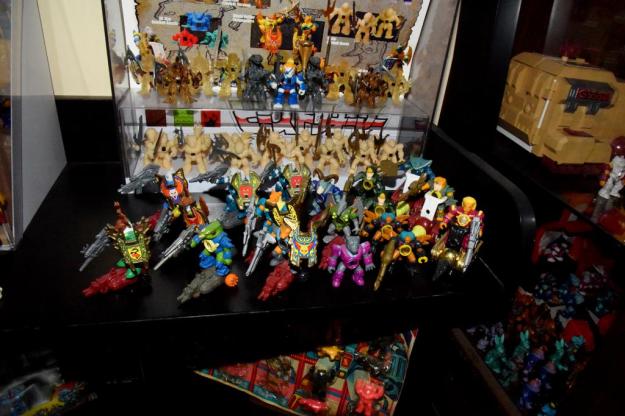 How did you collect? Did you buy in bulk or like just pick up BB here and there?

Mostly I tried to buy in bulk where ever I could. It was cheaper and quicker especially trying to get weapons. Here and there I went after single beasts, especially when I started collecting the mid and high end Laser Beasts.

Was it just the simple next step for you to start with Laser Beasts?

My first laser beast I bought on eBay in a lot of about a dozen MIB Japanese Battle Beasts. I was more obsessed with getting my first trading cards which didn’t exist here when I was a kid than I was with the beasts themselves or what would be my first Laser Beast. Once I had one Laser Beast though, I had to keep going. 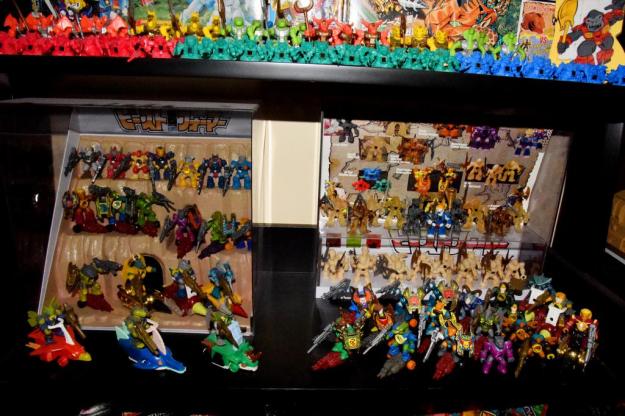 Did you know about Lasers when you were a child?

I never knew about any Laser Beasts or premiums except for the mythical American Sunburst Beast that no one had ever seen, even though “everyone” knew someone who had claimed to have seen it.

What are some of your rare pieces or grail pieces in your collection?

There are so many pieces I’m proud of; my Greek Indigo Shark is a special piece for me, the Prototype Blazing Eagle and Wood Beetle Bases and the Prototype Tiger Chariot as well as my carded American Sea Panic. Some wonderful new additions to my collection are some Bootleg Keshi Tigers on their card. My Blue BDC weapons I’m especially fond of, but in all I think the jewel of my collection is my Carded Yellow Buzzsaw 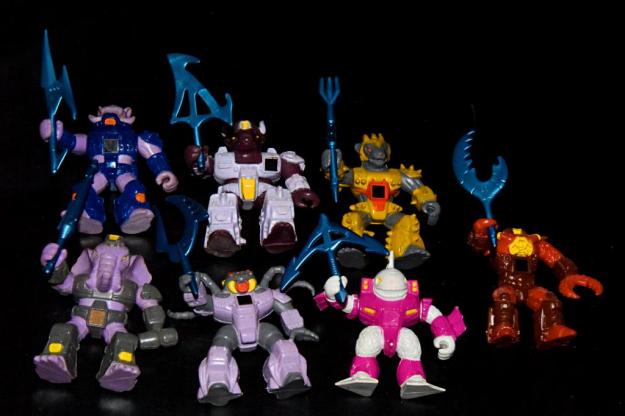 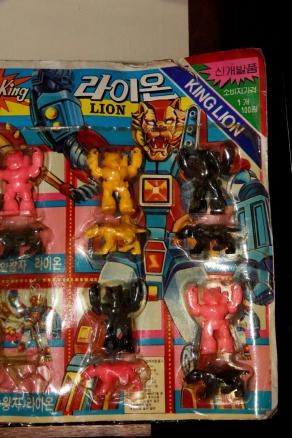 Who were the some of the hardest to track down?

I’d say it’s not so much about being hard to track down as being hard to wait for. The closer you are to any goal the more you feel every action and every moment taking you closer or further from it. When you have 10 Battle Beasts, finding 1 more is easy and waiting for a new one isn’t bad. When you have 75 the wait kills you. The hardest for me today? I’m still missing a Gumball Giraffe and through fate I always seem to just miss finding him. The Blue Drill too I had several close calls; one seller even backed out as I was about to send the money. Collecting is all about patience though. 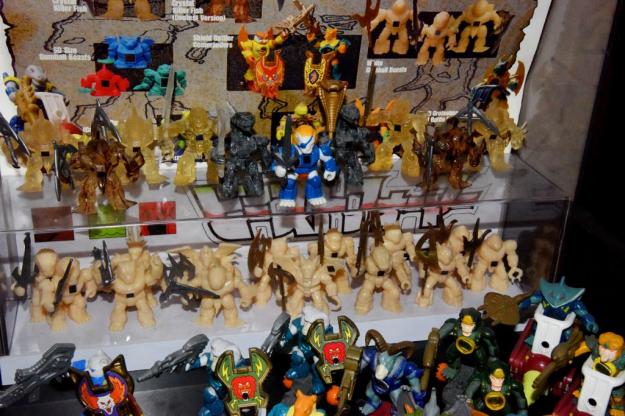 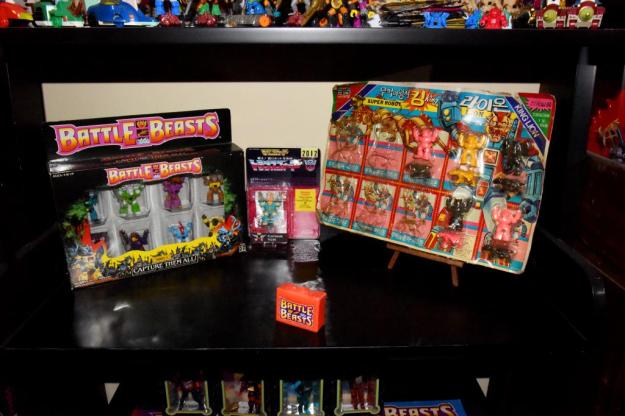 What are your favorite Foreign Beasts? Boxed Takara, Greek etc?

I Love the Greeks and the Gumballs but I would have to say the Beastias de Combate are my favorites. I love the subtle (and not so subtle) color differences. 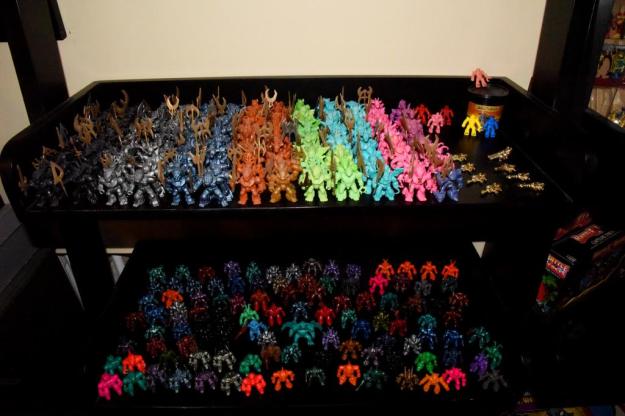 And what’s your favorite packaging?

I think the Punch Box would be my favorite foreign. I love the interactive quality of it as well as the design. It has a mystique to it that really draws me in. I’m very sad that they didn’t have them in the USA. My American favorite is the Unproduced Beast Eater’s packaging that I recreated to scale from a negative. 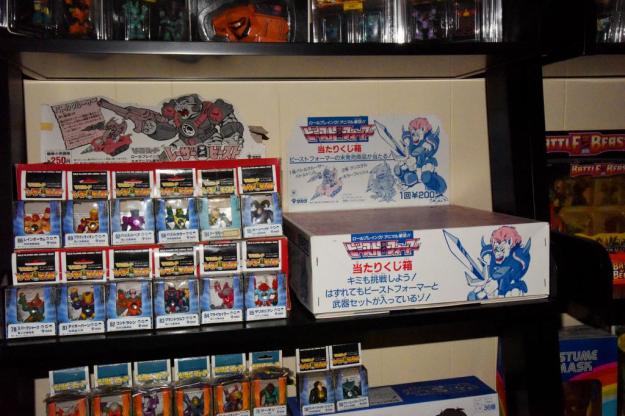 You are also a fan of Battle Beast and Laser Beast photography. When did you decide to start snapping them?

I always liked photographing my toys when I was younger. Then when I went to college I used to play around in the photo studio at 3am having not slept for days and that’s when things got rekindled. Being 21 and being 12 are very similar at times. 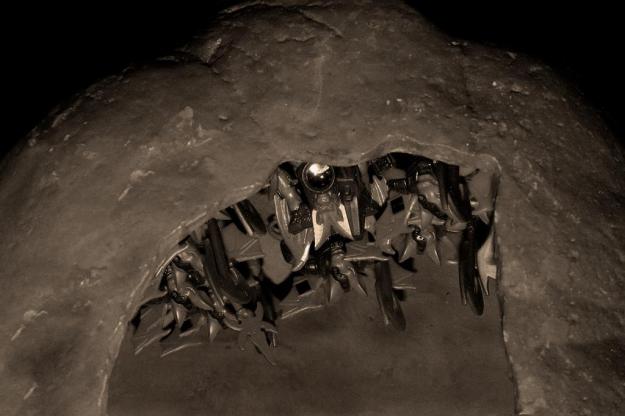 What are your Top 5 favorite Battle Beasts?

I refuse the constrictions of your question, you’re getting 6! 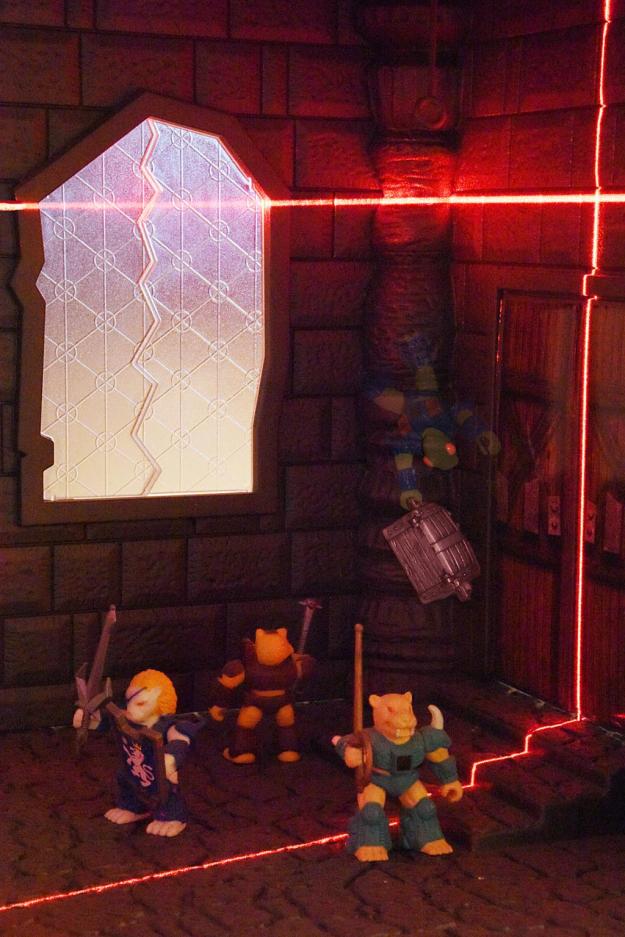 A Good Source For Beast Items